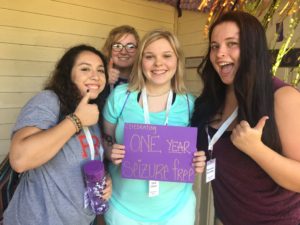 There are 3 major groups of seizures: generalized onset, focal onset, and unknown onset. You may experience just one or more than one kind of seizure. The type of seizure you have and symptoms you show depend on what part of the brain the seizures come from.

This term helps describe where seizures begin. Focal seizures can start in one area or group of cells in just one side of the brain. Focal seizures are broken down into two groups by how aware a person is of their surroundings.

SUDEP is the sudden, unexpected death of someone with epilepsy, who was otherwise healthy. In SUDEP cases, no other cause of death is found when an autopsy is done. Each year, more than 1 in 1,000 people with epilepsy die from SUDEP. The best way to prevent SUDEP is to take care of yourself! Talk to your doctor or epileptologist, follow your treatment, and live a healthy lifestyle.

No one knows what causes SUDEP, but people who experience the following may be at a higher risk:

Events that look like seizures but are not due to epilepsy are called. Psychogenic Nonepileptic Seizures (PNES) are a common disorder and have many different symptoms. Unlike epileptic seizures, nonepileptic seizures do not show any signs of abnormal electrical brain activity.

PNES may look like epileptic seizures, but their cause is psychological. In most cases, these seizures come from a psychological conflict or an underlying psychiatric disorder. There is no known cause for PNES.

The treatment of PNES is focused on addressing the underlying psychological problem. A person with PNES will not respond to treatment with antiseizure medication. Your neurologist may team up with your primary care provider and a behavioral health provider to find a treatment that works for you.